The works featured in this recording were written by mature composers from the Romantic period. Through these pieces Robert Schumann, César Franck, and Reynaldo Hahn transcend nationalism and extravagance. Using beautiful melodies and compelling harmonies these three composers created works that express music at its highest level. Although there is a gap of almost forty years between each work, they are united by the fact that these composers, led by their own desire, chose to create a fresh and elegant contribution to the chamber music repertoire. Originally conceived for other instruments, these three works have been carefully transcribed for flute and piano. Although, Schumann’s Three Romances and Franck’s Sonata in A major have been adopted by flutists for quite some time, this is the first professional recording of Hahn’s Sonata in C major. All three works are performed in their original keys and no changes have been made in the piano score.

This CD has a great review by Flutist Quarterly! 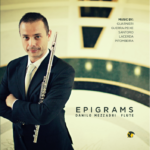 This CD has received wonderful reviews by Fanfare Magazine, Flute Quarterly, and the British Flute Society! 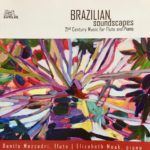 Brazilian Soundscapes was recorded and released in 2009. There are only a few copies left of this important recording!

This CD features world premiere recordings by seven active Brazilian composers. The works presented in this recording explore new sonorities, challenges the performers with intricate rhythms and exposes the listener to a wide range of expressions.

This CD has received wonderful reviews by the American Record Guide!

This CD features arrangements of Brazilian Bossa Nova, Choros, and  Piazzolla’s History of Tango. All pieces have arranged by Rodolfo Richter.

SPIDER LOG is a cool and fun way to get your practice routines or projects working efficiently!

The book comes with an instructional card and a very cool set of hand drawn spider stickers made by my sister, graphic designer Susana Mezzadri.

If you already know about this awesome little book, you can finally order your own copy right now!

If you don’t know anything about SPIDER LOG, don’t worry! I will be posting tips and instructional videos in the next few days.